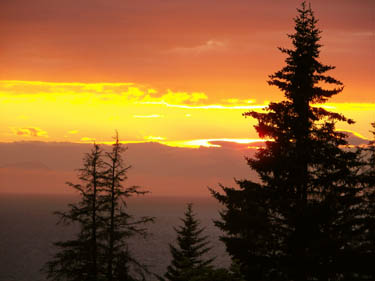 This blog post chronicles our family’s 2006 travels across North America in an RV named Lucia, and our towable shuttle pod Volkswagen Transporter named Gerty. At the end of our 2005 post, we were in LaCanada, CA to spend the holidays with our family the Borgen’s.

2-10-2006 I know, I know, it’s been a while since my last BLOG. In my defense, just like in your ‘reality’, there is just not enough time in the day. If I have learned anything on this past year, it has been that, even though we don’t have “real” jobs, we are still very busy.

Since I wrote last, we have traveled the coast of Washington through the Olympic Peninsula, we really enjoyed our revisit to Sol Duc Hot Springs with our Cousins Denise and Karen and my friend Jocelyn from Victoria, who came and joined us as well. We then traveled down the coast of Oregon, and started with Astoria. It’s a great town with lots of Victorian homes from the early 1900’s, and special people. We were introduced to the mushrooms that grow wild during the rainy months in the Northwest. Chanterelles were our favorite. Robyn was actually fortunate to go picking with her friend Casey and her family. We got to visit Portland, which is now our favorite city…just a little ahead of Boston. Eugene was a great experience; we did the famous Eugene Market and got to spend the weekend at an Eco Village. It was a great experience for Robyn, helping build eco friendly yurts and gardens. While in Eugene we met up with our friend from Alaska, Susan Muma. Really weird how she was there the same time as we were.

We headed back to the Oregon Coast and spent more time than we planned in a town called North Bend/Coos Bay. We are still not sure what the draw was, but it felt very comfortable and again the people made it great!. It rained, and rained and rained while we were there.

Northern California was incredible! The redwoods are inspiring and unbelievable. You can feel the wisdom of the trees when you’re amongst them. We stayed in a small town called Arcata, that we all really liked. The arts community was really big there.

We then went to Mendocino and loved it there. We were fortunate enough to stay with Joyce and her husband Richard in their wonderful home, while we were visiting and being involved with their church. Joyce has a rescue for cats/kitties and through her great work was able to find homes for 52 precious animals this year! Robyn was so hoping to play with a few while we visited, but they had all been adopted ……. Except one! Joyce told Robyn there was only one kitty left and it was a feral cat that was afraid of everything and stayed hidden all the time. She said it doesn’t seem right, kind of in a constant daze. This instilled pity and a challenge for Robyn. After spending 3 days with ‘Shadow’ (the kitties name) Robyn was able to get her for the first time to purr, clean herself and be comfortable in others presence to even play. This enabled Joyce to see that Shadow was adoptable and saw her in a different light. Robyn of course was emotionally attached to Shadow, but knew that if someone wanted to adopt her, that was as it should be. We gave it a time frame of December for her to be adopted and if not she would be Robyn’s. Joyce was taking her to the Vet to be check out and in doing so they discovered she has an enlarged heart. Now it was a risk getting her spayed, but very important not to pass on this genetic weakness. WELL, she survived the surgery and thanks to a lot of folks helping out, she was flown to us in Orlando. Robyn was so surprised and now she is part of our traveling family and has adjusted very well. She likes to stay in small spaces, hence the RV is perfect for her. Akbar has finally accepted her and they even sleep together. By the way Tess is doing great, she is the most gentle, sweet rat we’ve had…and,, she and Shadow are developing a friendship. Shadow is allowed by her cage and Tess doesn’t bite her.

After growing very fond of Mendocino and the incredible new friends we made, we had to move along. We then headed to catch up with our Montana friends Laura and Brian, they are fellow artisans that told us about a show in Senora, California over the Thanksgiving weekend. It was a great show, they have kids that dress up as elves, old time carolers and Christmas trees…a lot of fun was had by all. Good music as well. Robyn had a job working with a stained glass booth and got all kinds of goodies….she worked really hard too.

We then headed to wine country and stayed at the Russian River area. It was great weather and we were very lucky to enjoy the river. Two weeks after we left the area they had horrible flooding in the same area we were.

OTRA to San Francisco to visit the city and rendezvous with my friend Chris from Winter Park. She and her husband Bob were out there visiting with family. Chris was a great tour guide, we got to see the best parts of SF in a short period of time. We also got to see the new Harry Potter movie on IMAX, that was incredible.

We then traveled down the coast to Monterey and visted the Aquarium, which was one of the best Aquarium’s we have ever seen. We toured Pebble Beach and played tourists. From there we traveled East to the Sierra Nevada area, down to Lake Isabella. We stayed there for a little while for Paul to rebuild Gertie’s VW engine. Thank goodness my sisters best friend lived there and we had great time with Suzie and her family. It is a really beautiful area. We headed down to LaCanada, CA to spend the holidays with our family the Borgen’s. We had a tremendous time with them. Robyn learned the basics of chess from Rick who is a Master chess player. We made candy and sushi and had so much fun with the girls…young ladies now! Roxy, Karen and I never ran out of stuff to do together. Never enough time when I’m with this group. Paul had to rebuild the engine….again (apparently they don’t make the parts that good anymore) We all shared the flu and then we headed out to Arizona.

Arriving in Arizona was incredible. I didn’t think I would like the desert, but I was very surprised and how beautiful it is. We did a lot of hiking around Sedona (can’t even begin to tell you how magical Sedona is). Up in Flagstaff we got some snow and Paul and I taught some classes, which was very broadening for us. Down to Tucson to and the International Gem and Mineral Show. WOW, this was so overwhelming. I was able to reconnect with some friends and got to purchase some great stones for my jewelry. Robyn had a great time in the desert as well, she learned about cactus and how they bite. Coyotes and mountain lions were all around as well. Interesting feeling hearing the coyotes howling now to far from the RV. Funny the cat didn’t want to go for a walk there?) J Off we went to New Mexico to visit our dear friends in Albuquerque and celebrate Robyn’s big ’13th’ birthday. On the way we stopped in Faywood Hotsprings and we were pleasantly surprised by this wonderful hotsprings. They had no sulphur smell to them and they were fabulous. And to top off the experience we met 3 other couples that were of like mind and we had the most stimulating, uplifting conversations. We had a great ceremony for Robyn’s coming of age and made some life long friends. Albuquerque was a wonderful as we hoped. Robyn got everything she wanted for her birthday and few more surprises. She wanted to make her own birthday cake and she and Betsy had so much fun putting together a chocolate, chocolate, strawberry cake. It was so good, but kept us up half the night J We headed south to Carlsbad Caverns and were totally amazed at this place, it is a must see. We had to visit Roswell, being it is on the way. We stopped in the museum and it was a hoot. Very campy and interesting. Off to Texas. We visited some new friends in Austin and ran into Susan Muma from Alaska in downtown Austin….what are the chances of that! It was quite a reunion and a surprise. Time to head to Florida! The drive through the southern states was very eye opening. The hurricane damage was still very visible. We were going to stop in New Orleans to check it out, but it was the same weekend as Mardi Gra and we didn’t want to get in that mess. We spent some time in northern Florida and visited Tom & Julie in Floral City. They have a great place that has Emus, Zebra and donkeys…oh my.

Home again, home again, likity split we are back in Orlando catching up with everyone.